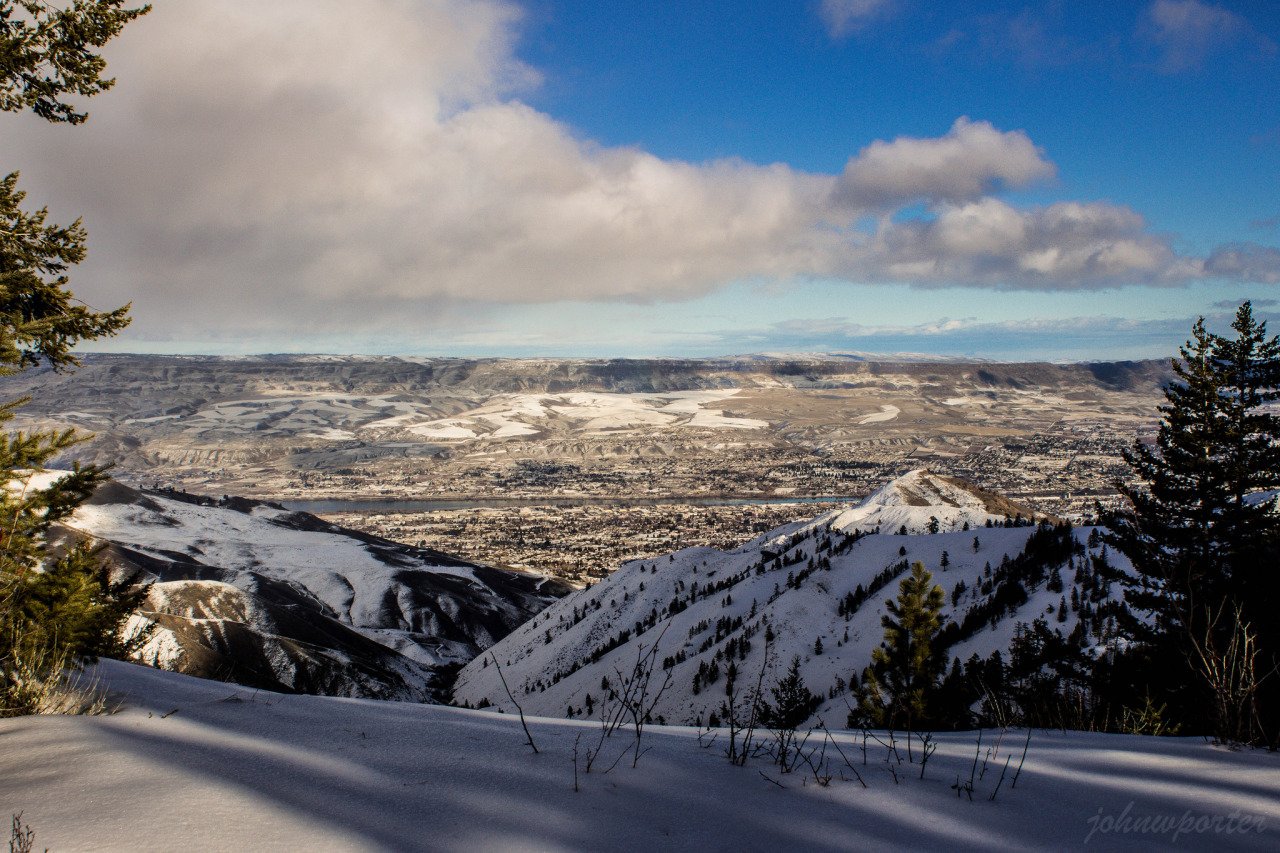 Long drive to the trailhead made the late start seem even later, already four other cars parked when the pup and I arrived. It was sunny like the weather forecast had indicated.

First portion of the road had seen enough foot traffic, just microspikes would do. We stayed on the road for an eighth of a mile or so before making our way up the slope to gain the southeast ridge. There was more snow on the ridge and snowshoes would benefit most people. I kept my microspikes on, at times followed what looked like tracks from earlier in the day.

Northwest wind was blowing the entire time, which made the slope and ridge traverse rather uncomfortable. Partly weather took a turn just before the final approach on the south face. The wind blew stronger and it brought in snow from the west. Perfect timing for not getting the views I had hoped for.

We took refuge on the east side of the summit rocks, waited 20 minutes before the wind died down and the snowing stopped. About a 10-minute window with some views, just enough time to get some photos before the clouds rolled in with more snow.

Strong wind continued as we made our way down, with snow flying in all directions and visibility  extremely poor. By now our old tracks had already been covered by the new snow, so I put on snowshoes to speed things up to get off the mountain.

Our old trio attempted the peak six years ago. But glad to reach it this time with the help of my two fur partners.
But then I looked down from our weekend destination. And I knew that it was the far better seat in the house.
I’ve always thought that Dog Mountain at the head of the NF Snoqualmie River Valley had the best view of the MF Snoqualmie River corridor.
📺 I was casually seeing Prince Hairy. So there was the whole, like, “Is he gonna be a princess?” thing.
📺 I could not be more at one with nature. I do Coachella every year.
📺 Do I wear my fringed vest? Or, more importantly, do I wear anything under it?
📺 I have never heard someone say so many wrong things, one after the other, consecutively, in a row.
📺 Being approachable isn't that important anyway. The Queen hasn't smiled since the 70s, and her birthdays are still very well attended.
📺 "Funky" is a neon t-shirt you buy at an airport gift shop next to a bejeweled iPhone case.
📺 The idea of me life coaching another human being should scare you...a lot.
📺 I’m trying very hard not to connect with people right now.
📺 I'm expensive sushi, I'm a cute huge yacht. I'm a little bit single even when I'm not.