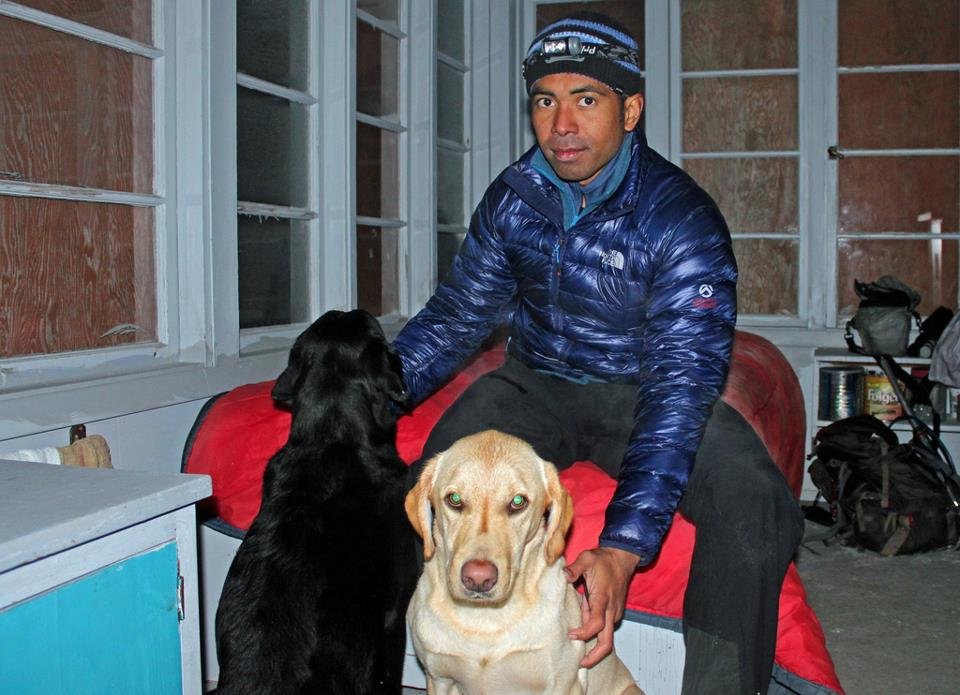 Earlier in the week I saw this trip on nwhikers.net and decided to give it a try. Precipitation rate 80 to 100% throughout the Cascades, virtually nowhere promising for views.

Only one vehicle parked by the trailhead when we arrived, and we started hiking just past noon. The goal was to get to the lookout before sunset and hike back down in the dark. Judging by the trailhead register, the  party from the other car had planned to spend the night in the tower.

Weather started with a light drizzle, but  soon turned into flurries when we reached 2,100’ elevation and stayed that way all the way. Using the tracks left by the other party, I was able to continue with just spikes. Snow got deeper after we crossed Lookout Creek, even more snow after we broke out of the tree line. At one point pups got ahead of me and caught up to the other party.

About another hour and a half before sunset time when I finally caught up to the other party. None of them brought snowshoes and it made breaking trail a bit of a struggle. I put mine on and got in front of the group to start breaking trail. Even with snowshoes I was still postholing in several feet of fresh snow. Sun finally set at 4:30 PM and it wasn’t long before darkness descended. I put on headlamp as pups and I continued to plow through snow in the dark. Periodically I’d looked back to see check on the other party.

It was a quarter past five when we finally got to the last switchback below the tower. Judging by my GPS, we were pretty close. But I wasn’t entirely sure how close since it was pitch dark. A short while later I came across a box half-buried in the snow, and both pups were sniffing around hard for some reason. I curiously opened the box and discovered that it was a toilet! Good news, this meant that the tower was not far ahead. About a hundred yards past the toilet and just out of the trees, a gigantic shadow loomed overhead in the darkness. Alas, the tower.

After getting up two flights of stairs, I was happy to find the tower door unlocked. So nice to finally get out of the snow and wind gusts. Inside was roomier than I had pictured, furnished with two beds with bedding, a desk, bookcases, an oven, and a history platform in the center of the room. I sat on the bed and scoped out the room to discover a Coleman lamp hanging from the ceiling. I then lit the lamp after carefully reading at the instructions for sometime.

Last time I was able to see the other group’s headlamps they were getting to the last switchback. I flashed my light hoping that they knew I was at the tower. After hanging out inside for an hour, it became obvious that the hikers had turned around. I wasn’t comfortable spending the night alone with the pup, so I decided to head back down as well. I had brought enough dry layers with me so I was able to get quite warm before diving out into the cold again.

Halfway down the mountain we caught up to the hiker. They told me that when they saw my light flashing from the tower, they thought I was still on the trail and decided to turn around without knowing just how close they were. Pups ana I hiked the rest of the way back to the car with the hikers. It was nice to have some company in the dark.