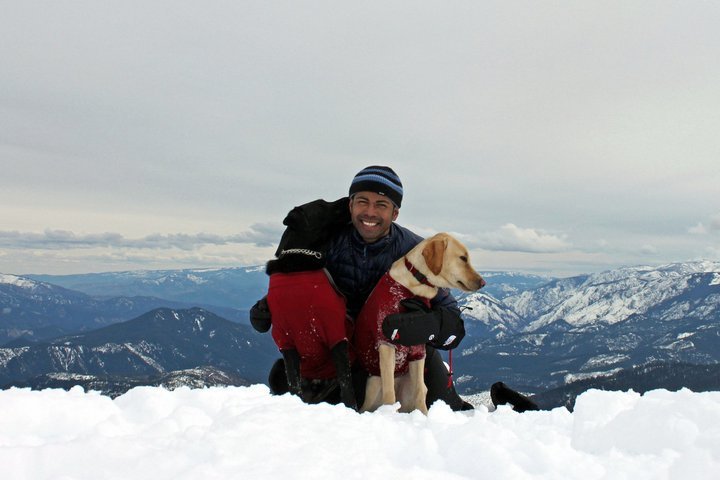 The weather was crappy on Saturday…again. But what else is new? Not that Sunday’s weather was anything to write home about, but at least some areas were forecast to be partly cloudy. This meant east of the Cascades east would be a better bet when choosing our hike for the day. I searched for hikes in the Leavenworth area and couldn’t find anything doable this time of the year.

Looked around Lake Wenatchee area and found Dirtyface Mountain to be a possibility. I came across a trip report dated January 2009, the man was able to get to the Lookout in full snow. Being that it’s now April, the odds of summiting seemed pretty good. So Dirtyface lookout it was.

From the parking lot the mountain didn’t look like it had a whole lot of snow, but that could just be the perspective from down below. I was afraid by bringing my snowshoes they would end up being dead weight, but I’m glad I did. The trail was clear of snow for the first mile or so but with lots of snow water flowing down the trail. Once we crossed the avalanche chute, patches of snow started to appear. Then patches of snow became full-on snow before we got to the first big switchback. I tried holding off on putting on the snowshoes for as long as I could, but post holing got worse and worse with every step.

We left the trailhead at 10 AM. Judging from the hiking registry at the trailhead, the last snowshoe group was here two weeks ago. Needless to say, there would have been no tracks to follow. So I needed to break my own trail and it would take me longer than anticipated. The slope got dramatically steeper at around 3,400 feet, and it got harder to break a trail while post holing. We took lots of breaks just to catch our breath and give our legs a rest. The steepness of the slope reminded me of our hike to Painted Mountain but with snow.

At the rate we were going, I wasn’t sure if we would make it to the lookout by the 3 o’clock ETA. Once we got to 5,000 feet I felt a lot better because it was only another 1,000 feet to the top. The snow got more packed the higher we got, but not by much. We were still post holing somewhat.

We made it to the top at just a little after 3 and it was still sunny. The view atop was amazing, not to mention being able to see Lake Wenatchee this close up. The boys ate and played a bit while I took pictures and soaking in the view. We stayed for nearly an hour, took our usual group pictures before heading back down the mountain. We got back to the car just before 7 followed by a two-hour drive back to Seattle.