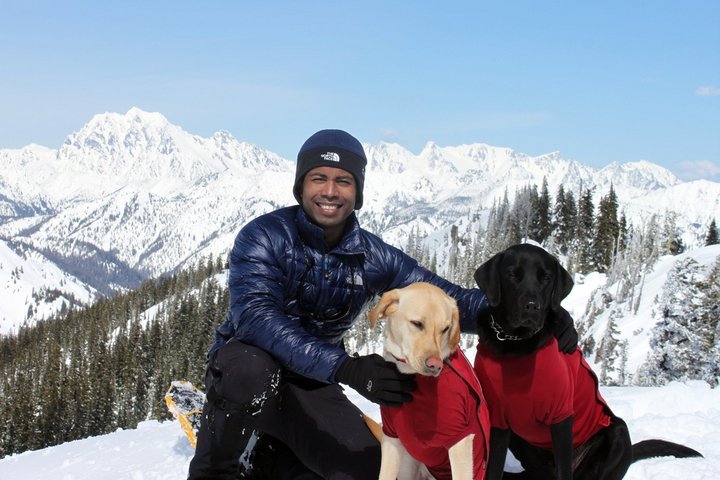 So glad I took Friday off to do this hike. Knowing the weather was going to be gorgeous, I wasn’t about to pass up the opportunity of getting an awesome panoramic view wherever I might end up.

Yellow Hill and Elbow Peak have been on the back of my mind for while now. The boys and I haven’t been in Teanaway since Hex Mountain, so it was a perfect day to try out the peaks.

The roads leading to Middle Fork Teanaway Road were free of snow until end of the pavement just past the gated ranch. The snow looked old enough and not too shallow so I felt okay to drive in. Although I didn’t want to relive Tonga Ridge, so I was extremely cautious. I parked the car by the 113/230 service road junction just a little over one mile from the trailhead. Anywhere beyond that point would not have been a smart thing to do, as I nearly got myself stuck in this narrow passage on the other side of the junction.

Snowshoes were not required for the first mile or so in from the trailhead; I put them on at the service road/trail junction, at about 3,800 feet. Post holing began just before the first steep ridge, then packed snow was hit and miss. I constantly monitored my GPS to make sure I was on the right track.

A group of three hikers, Suzanne, Barry, David, and their dog Gus showed up after I descended the steep ridge. The boys were excited to see another dog and fresh faces on the trail, apparently I wasn’t too exciting for them. I joined the hikers so I could focus on hiking rather than taking pictures and losing track of time. Our first stop was on Yellow Hill. Nice view of Rainier, Mount Stuart, and the Kittatas Valley. The trees were still in the way of the panoramic view I was craving for, however. We took a short break, enough time to get some food and water in and then we were back on the trail heading for Elbow Peak.

Walking along the snowy ridge was pretty cool, not sure if I’ve done that before. Lots of cornices along the way and the snow felt less slushy. The ridge line leading up to Elbow Peak was straightforward, pretty much a straight line. Being able to see the peak helped with knowing where we were headed. Although the GPS/Map indicated the first bump after ascending the ridge line was the peak, another bump beyond that was definitelytaller and that’s where we ended up. The “unofficial” Elbow Peak as I called it.

Gorgeous view all the way around, although clouds were slowly moving in surrounding farther peaks. I managed to snap some good photos before the peaks submerged into the clouds. Mount Rainier had disappeared from our view during the course of all that, so no good pictures of the peak. Disappointed.

We stayed on the summit long enough to wipe our sweat, catch our breath, and take pictures, and then we were on our merry way down the mountain. Getting back to Yellow Hill became a chore since I was lacking water. I was relying on water from the snow and slush, but it was barely quenching my thirst. Going back up the first ridge below Yellow Hill was not as bad as I thought it would be. After the ridge it was all downhill all the way to the trailhead.

After getting to my car, I gave the hikers and dog a ride back to the end of the pavement where they had parked their vehicle. It was another two-hour drive back to civilization. One great hike down and many more to go!