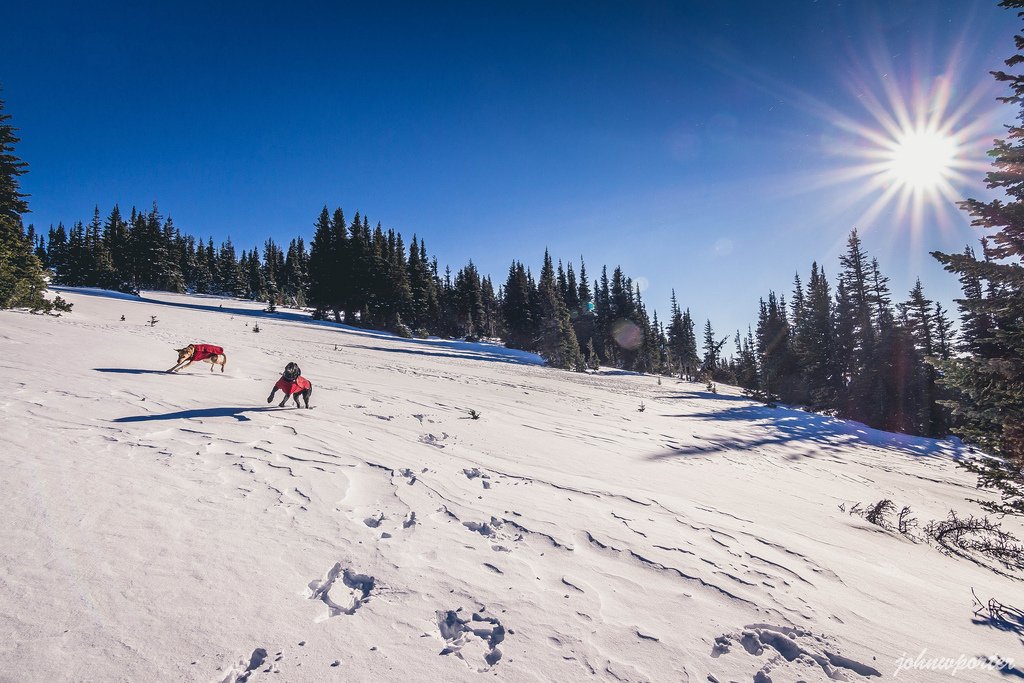 Time flew by us quickly while we were having fun, hard to believe it’s been three years since our last visit. Weather on Thanksgiving weekend 2012 was less than ideal, and there was much more snow then compared to today.

Third time up this mountain, twice in winter conditions, and both times in winter conditions the wind had been relentless. Wind speed today was forecasted at 7-10 mph, but I swear it felt like 25-30 like the last time. Thanks to the bluebird day weather, we were much warmer and had views as far as our eyes could see.

One car in the pullout parking off Crystal Mountain Blvd. (road 1802) across from the gated road when the pups and I arrived in late morning. Intermittent snow from parking area to the switchback with first full view of Crystal Mountain Ski Resort. More snow beyond that point but still wasn’t enough for snowshoes. I thought about putting on microspikes for traction, but the couple who started before me left good enough tracks for me to stay balanced.

More snow on the ground after crossing the wide, open basin

just before heading back into the forest, but I was able to continue using the couple’s snowshoe tracks. Eventually the pups and I started to posthole in the meadow at 6,300′ so I finally put on snowshoes there. Briefly chatted with the couples on their way down just before reaching the ridge at 6,600. On the ridge we were able to follow the couple’s tracks for a short while, until the tracks stopped at where it looked like had been the couple’s turnaround point.

The wind had been blowing all along wherever there wasn’t much tree coverage, but it wasn’t too bad until the minute we stepped onto the ridge and it

drastically worsened. It felt very uncomfortable and nearly unbearable, and we sought coverage from the trees by staying mostly on the west side of the ridge. As soon as we reached the first ridge knob, we quickly made our way behind it onto the southwest face just above where the summer trail normally would be. And we continued to stay below the ridge line to avoid wind gusts coming in from the east. At least forecast was right about the direction of the wind, whew!

We spent most of our time on the summit on the less windy south side. Rainier was beautiful as always, so were the other snow-covered mountains near and far. Mount Adams and the Stuart Range were crystal clear, what a beautiful day to be on this peak. One hour went past rather fast, and we finally left the summit half hour before sunset.

On the way down, instead going back via the ridge, the pups and I dropped into the west basin to dodge the wind gusts higher up. From the basin we scrambled and made several shortcuts to eventually connect up with the trail just before crossing the wide, open basin at 5,800′.