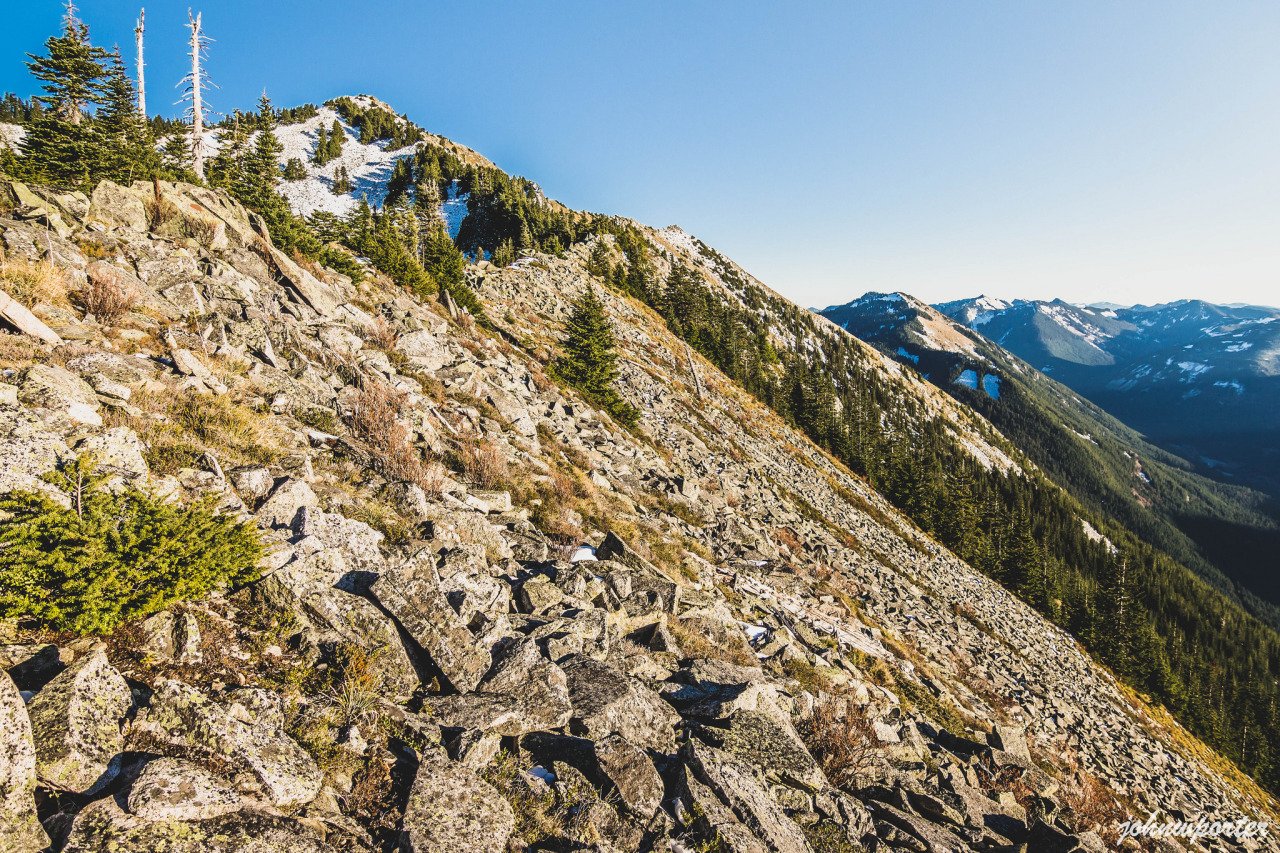 Pups needed their beauty sleep this morning so they couldn’t #optoutside. From the parking area to the trail turnoff was about half a mile. Some people I know had missed the turnoff in the past since it’s somewhat inconspicuous. If it helps, there is blue flagging tied around a big tree on hikers left directly from the turnoff.

Turnoff to get up to the lower basin was located immediately after the big stream flowing across the road, a cairn was strategically placed there so can’t miss it. Since the road was in such a bad shape, long deteriorated and overtaken by trees and brush, there were plenty of cairns to guide people through. been long deteriorated and overtaken by trees and brush. The truck parked just after the first switchback was still there and served as a good reference point. Scramble began just past the truck.

First time pups and I visited this mountain was in the spring two and half years ago, back when there was plenty of snow coverage in the basin so talus and alder weren’t an issue. Since we haven’t gotten enough snow yet, it was brushy everywhere I look, and couldn’t decide on a good entry point to scramble up the slope to the right of the stream. I managed to get up a couple hundred feet before needing to find a good way around the massive alder in the basin by getting higher up on the slope. Eventually I was forced onto the steep west ridge of Web Mountain and decided to just keep following the ridge line instead of dropping into the basin like we did before.

I hadn’t read any trip reports via the west ridge, and I wasn’t sure if I’d get cliffed out. First three hundred feet up to 4,000′ was narrow in most places with big boulders stacking up and steep on both sides. Rather than trying to stay on the ridge crest by climbing up these boulders, I stayed high on the steep north side and followed the ridge that way. Once at 4,000′, south slope became gentler while the north side stayed steep, but I was able to start walking on the ridge at that point. Depending on the amount of trees on the ridge, part of the traverse was on the south side just under the ridge crest to and that got me to 4,400′ to the end of the big talus. From there, I stayed on the south side to avoid trees, and eventually connected up with my old track from my GPS at 4,800′.

If it weren’t for the absent of snow, getting from 4,800′ to the summit would have been a breeze. This time depending on where the boulders cliffed out, I would need to drop down to the south side and work my way around the cliffs, which wasn’t too bad. After getting around the last pinnacle at 5,000′, the rest was an easy scramble all the way to the top.

I stayed on the summit until sunset time. Not wanting to get back on the west ridge and down climb parts of it in the dark, I decided to slowly make my way down the the massive talus-covered west face. After fumbling through half-arsed snow-covered boulders and brush in the upper basin, I stumbled across what looked like an old trail at 4,000′ just before reaching the lower basin. The trail eventually connected up with Dirty Harry’s Peak trail and down the mountain.