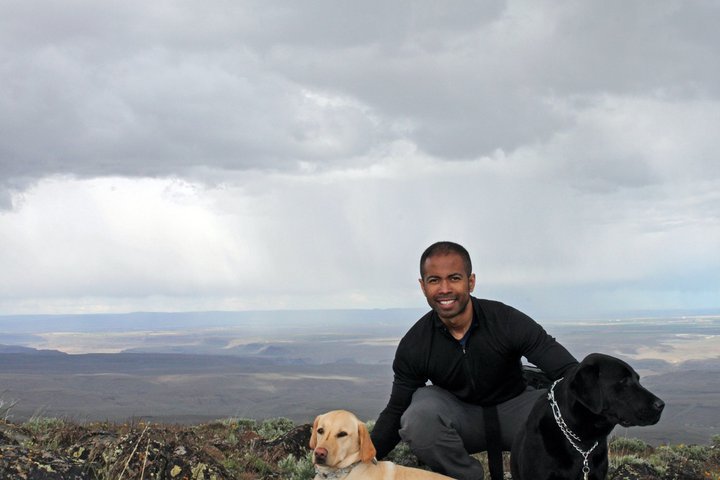 The directions to Whiskey Mountain trailhead on the WTA site was somewhat misleading. The coordinates provided was close to eight miles each way, which would have made the hike close to 16 miles total. We backed up for one and a half miles to the first bend after the turn-off from Vantage Highway and started hiking from there.

The weather started partly cloudy, then became partly sunny in the afternoon. The clouds were moving fast enough, at times there would barely be any clouds above us. The northwestern sky looked ominous with a large group of dark clouds hanging around, and eventually the west wind would bring them closer to us. Lots of wildflowers, too many to name, nor would I know each and every one of them by name. Not too many wildlife activities happening, only saw an owl, a jack rabbit, and a bird along the way. The temperature was just right for a desert hike at this time of the year.

This was the first time I saw the wind turbines this close; they were quite impressive. Before I would only notice them while driving on I-90 and already thought they looked really cool looking. The brochure I got from the PSE Renewable Energy Center stated that we needed to keep at least 300 feet away from each turbine. Regardless, they all looked enormous and statuesque even from 300 feet away. To get up close and personal, we would need a guided tour.

We scratched our plan to go to Whiskey Mountain due to the number of strewing barbwire fences throughout the protected area. Instead, we circled along the ridge line and stopped just before the group of turbines located directly southeast of the mountain. After admiring the turbines for a while, we turned around and followed the ridge line to the east and stopped at a high point about 2,880’. The weather was beginning to get ugly even before we got to the top, then it started to drizzle just as we were getting to take our group photo. We only had time for one and then the rain came down mercilessly.

Good thing I brought my rain gear along, knowing that there would be a 30% chance rain…and hail. It rained and hailed harder as we traversed down the hill heading for the car, which was parked about two miles south of the high point we were on.