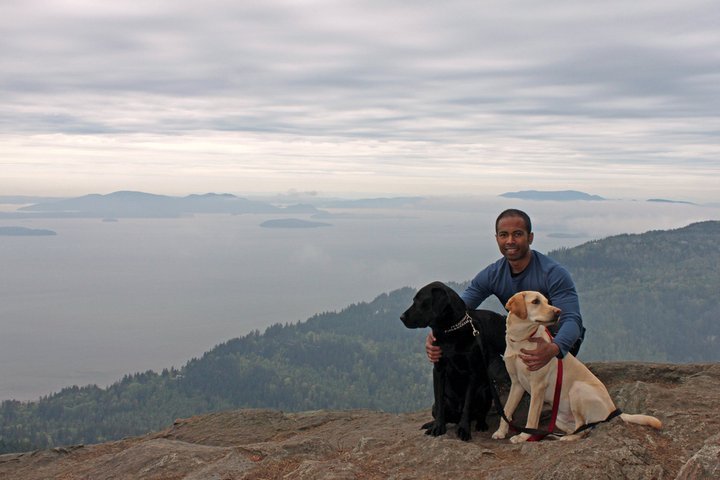 Oyster Dome was among one of the recent hiking trip reports on the WTA site, and it’s also been on my list of backup hikes when all else fails. It was another wet weekend in most parts of the Cascades and not too many pockets of rain shadow to choose hike wise. Surprisingly, west of the Cascades had only 50% chance of precipitation, so Oyster Dome immediately came to mind.

The drive to the trailhead pretty straightforward. By the time we got to the trailhead at 9 AM there were already five cars parked across the street. Two more cars showed up after we started hiking. The hike is part of the Pacific Northwest Trail (PNT), and many signs were posted throughout to aid hikers in finding the right places. There were also several junctions leading to various destinations along the way. A couple of the viewing spots on the trail allowed us to get a glimpse of the Puget Sound islands.

The main path took us to Oyster Dome and it felt like a breeze. Before we knew it, we were atop the granite rock looking out to the water and the surrounding islands. Two other parties arrived shortly afterward. The islands looked amazing, even though it was a bit hazy and the distant islands were harder to make out. I was able to capture San Juan Islands with the long lens but nothing beyond them. I wonder if I could also see Victoria on a bright, sunny day. Due to the popularity of the hike, the boys were on leash the entire time. I’m sure they weren’t too happy about not being able to run around and explore. But we’d save that for another weekend.

The 6.5-mile hike seemed rather short, so we decided to make a detour to Lily Lake on the way down via the other side of the junction at the top of the ridge. On the way to the lake we saw a horse rider, and that was the extent of our wildlife sighting. The lake wasn’t much, looked more like a pond than a lake and a bit swampy. We stayed for about five minutes, took some pictures, and then went back down the mountain.

On the way back, we ran into the lady whom we saw at the top while we were getting ready to leave. She was looking for her party that never made it to the top. She wasn’t sure if they had turned around midway through the hike back to the car or if they went on another trail. We talked for a little while and hiked down together until we saw two people sitting on the bench at one of the viewing spots. Luckily, they were from the lady’s party; the rest of them went on another trail and would be back to meet them shortly. We parted ways and the boys and I arrived back at the car around 2 PM. Many more people coming up the mountain on our way down.