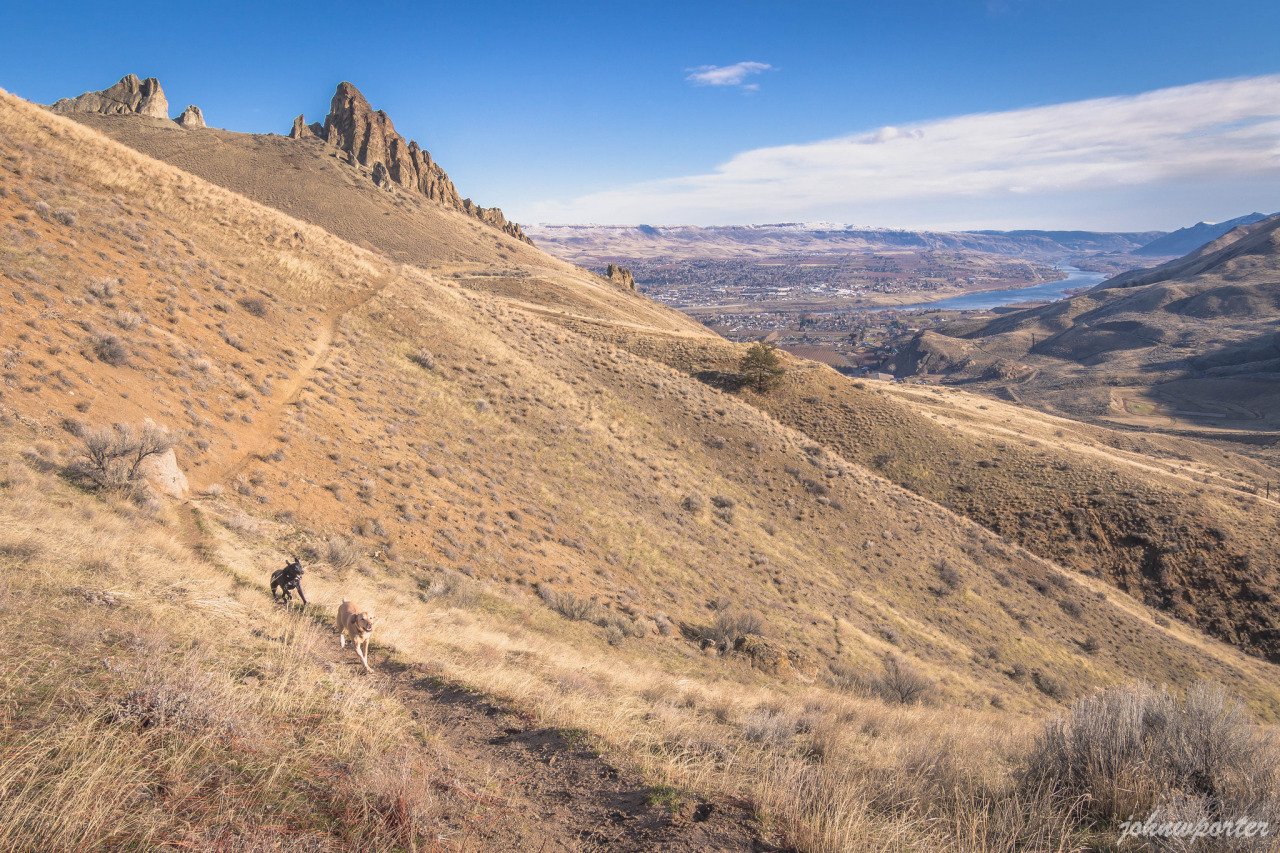 Winter storm in the Cascades this weekend, so we sought refuge on the east. Second visit to this place and the rock feature looked just as impressive as it did the first time. The hike up to the rock isn’t terribly long, I’d imagine it would take no more than 45 minutes round trip including a short break. Weather here was much warmer than I had expected.

Given the long drive from Seattle, the walk up to the rock alone would not have made this trip worthwhile. So, like the time before, the pups and I maximized the mileage by making a loop out of the scramble/hike. This time rather than walking up the road from the car, we stayed parallel to the canyon south of the rock, where a road marked “4WD” on the map could be seen just south of the canyon.

We made several stops for photo ops heading westerly. Snow as much as six inches could be found in most places, although most of it had melted since the previous snowfall. Columbia Gorge south of Wenatchee slowly came into view as we gained more elevation. At some point I noticed a fence had been put in on the north side of the canyon. I wasn’t entirely sure if the fence marked private land or an old fence that never got taken down. But just to be safe, we stayed on the north side and hiked alongside it until we arrived at the big “No Trespassing – Hurd Ranch” sign that was also there the first time.

From the sign we headed east to the viewpoint (2840′?) with a big tree. It was incredibly windy but the views down to the gorge definitely made up for the chill factor. From the viewpoint one could see the whole City of Wenatchee stretching from north to south alongside the beautiful Columbia River Gorge. The aesthetic Chelan Mountains at the north end of the city were all under a blanket of snow, but snow level looked high for this time of the year.

The wind stopped a few times during our one-hour stay, but it started blowing again just as we were getting ready to descend. The road was mostly wet and muddy, so we avoided it by scrambling toward the canyon and reconnecting with our old track to get back to the car.