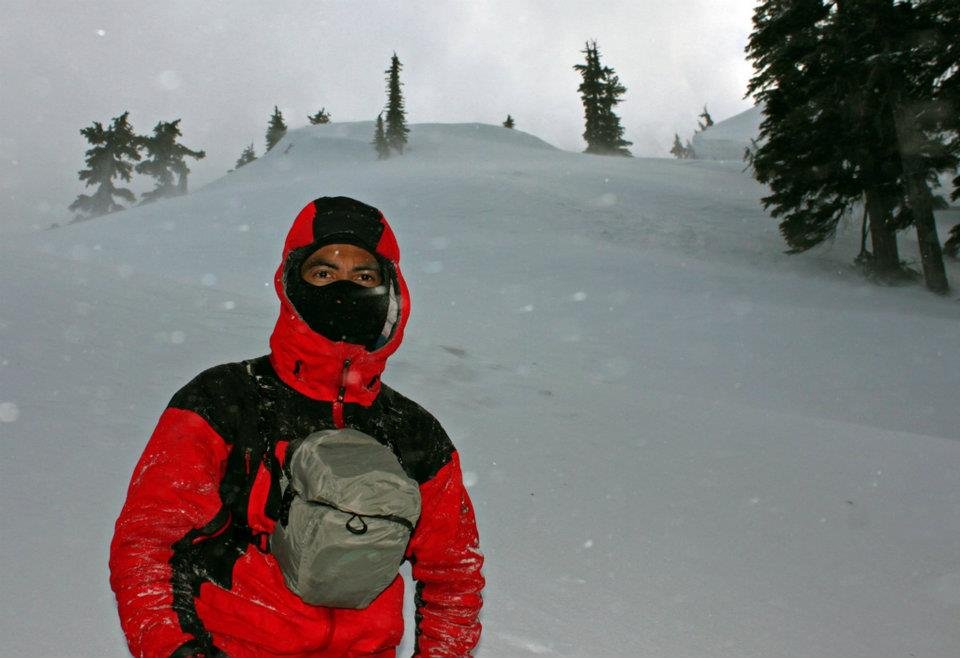 Just under 5,200’, Guye Peak looked like a piece of cake. That may be the case in the dry months, in winters months the peak a different beast.

Shortly after leaving the Alpental ski area, I found some old snowshoe tracks on the steep slopes that looked to be heading toward the Snoqualmie Mountain/Guye Peak trail junction. I followed the tracks for a while before they dwindled right before reaching the junction. The wind grew stronger and the snow continued to fall as I found my way to the saddle where I left the trail and headed south toward Guye Peak. On a clear day, Guye Peak would probably be in view from the saddle.

I ran into two hikers having lunch while dodging the wind just east of the saddle. They had come up from the Commonwealth Basin side using crampons and ice axes. From the saddle, by staying mostly on the ridge crest took me straight to the summit, with only a couple of tricky spots to negotiate but nothing major.

Summit was extremely windy and without views. Some of the clouds miraculously dissipated shortly after, allowing me to get a few quick photos of Alpental and Cave Ridge. Hard to fight fight the summit wind to get a selfie, so I descended about 100 feet to get out of the wind to do that instead. Meanwhile, the snow continued to fall.

Afterward I made a quick descent and got back down to the ski area just before dark.