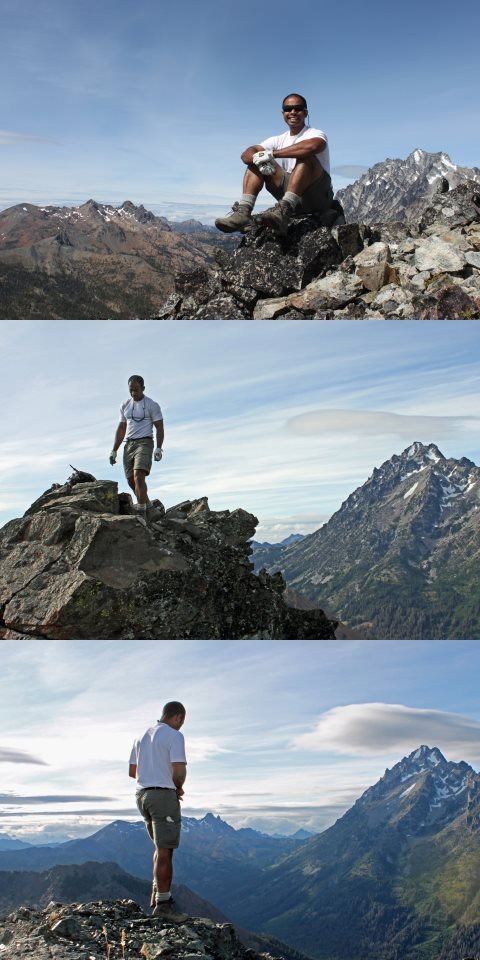 Bill and I had unfinished business. All week long I kept thinking about not getting to Bill’s Peak over the weekend when we climbed Teanaway. I checked the directions again and realized I had read them wrong. There was no need to hike the way to Fourth/Ingalls Creek trail junction to get on the ridge. The peak could be attained simply by climbing up the east face at the Fourth/Hard Scrabble Creek trail junction.

The lower portion of the east face was steep and full of scree, so trekking poles helped a great deal. Once reaching the forested ridge things tapered down a bit. A hikers’ trail would weave in and out of the loose rocks and short bushes but it was easy to spot. The last hundred feet or so was an easy walk-up all the way to the peak.

While standing on Bill’s I looked to the east at Volcanic Neck and Devil’s Head and decided to bag both on this trip just so that I would be done with the inner portion of the Teanaway Top 20. Got back down to the trail junction and started heading east on Hard Scrabble Creek trail. The trail lead me all the way to the saddle just southwest of Volcanic Neck. The rock formation looked much larger closer up! According the directions I found online, the scramble route would be on the northeastern side of the formation. I wasn’t quite sure how to get around to the other side so I started walking clockwise. It didn’t take long before I knew this wasn’t the best way to get to the scramble route. I checked out the rock condition and figured it wouldn’t be any more than a class 3 to low 4. Although I would have felt a lot more comfortable with a rope, but it didn’t seem necessary. With a class 3-4 move in a couple of places, I was on top of the Neck before I knew it. From there, I started traverse northeasterly to the highest point of the Neck, which sat just at the top of the common scramble route.

Getting down through the scramble route on the other side was definitely a lot easier and way less nerve-racking. Hopping and skipping over easy rocks and scree, I was near the top of Devil’s Head within a half hour. The Devil’s Head only looked like one from Volcanic Neck or Bean Peak. I believe this was the closest I got to be in front of the Stuart Range, not counting Mount Stuart and Sherpa Peak.

On the way back, I discovered the hikers’ path on the east side of the Neck that would have initially taken me around the formation. I took the path, got myself back to the southwestern saddle, and traced my way back to Fourth Creek Pass before taking the trail all the way back to the car. At the Beverly/Fourth Creek trail junction, I ran into the same group of WTA volunteers plus a few more who were in the area for a week-long trail maintenance project. They graciously offered me dinner, but I couldn’t stay long and wanted to get back to the car before dark.