Dragontail Peak and Little Annapurna are two Bulger List peaks inside The Enchantments of Alpine Lakes Wilderness. They are close together to climb in a day in optimal weather. Colchuck Lake and Lake Stuart Trail offer the most direct way to these peaks.

Dragontail Peak and Little Annapurna at a Glance

At the beginning of the week, I posted on nwhikers.net looking for a permit. Then I was lucky to get a Colchuck Zone permit at the last minute. So this weekend, right away, I set off to The Enchantments for the first time. It was my final backpacking trip of this season.

I enjoyed a dry approach to Colchuck Lake despite the gloomy weather forecast. It took me two hours to get there. Then I spent another half hour finding a campsite by the lake. Afterward, I set out to climb Dragonball Peak via Colchuck Glacier.

The icy Colchuck Glacier had complicated things. Either I had misread the reports, or snow conditions had changed drastically overnight, but I wish I had brought crampons. It was only one and a half hours to sunset when I made it up to the col.

Since I barely had enough daylight to climb one peak, I settled on Dragontail Peak. I was after the views into the upper basin of The Enchantments. With maps in hand, I started heading up the west slopes. The technical scramble turned out to be straightforward. Before long, I was going up the south face toward the summit.

I quickly surveyed the area when I reached the top. Colchuck Lake looked gorgeous from up here! Then I shifted my attention to the broad terrain to the east adorned with water piddles. But it took a minute to understand what I saw–the upper basin! Wow! Now I couldn’t wait to see it up close tomorrow.

Darkness fell as I went back to the col, but I still needed to go through the glacier. I held the ice ax firmly and slowly slid down the snow sideways. I was mostly on my right while hugging the slope’s west end. Meanwhile, the sound of rockfalls from Dragontail Peak was nerve-racking.

Back to Colchuck Lake Camp

It took an hour to get to the bottom of the glacier. Then another hour to scramble back to camp. While sliding down the glacier, I felt a burning sensation on my right calf. It ended up being ice burn, something I had experienced for the first time.

Later, according to the doctor, it’s the opposite of sunburn. But it sure was a night full of excitement.

It was exciting to see the upper basin, but the rain came at dawn. So I waited patiently inside the tent until it eventually stopped in mid-morning. Soon, I left camp toward Aasgard Pass, which was steep but not as horrible as mentioned in some reports.

Walking up to the pass had made for a great workout. I didn’t have plans to see Snow Lakes Basin. But I only had enough time to explore the upper terrain and Little Annapurna. I was in awe of the lakes and the Middle-Earth-like landscape as I neared the base of the peak.

It was cloudy when I began scrambling, and then the rain came down when I neared the summit. I stayed on top long enough to take a selfie before leaving without views. The weather slowly improved later, and even the sun made a cameo at one point.

I continued to walk east almost to the edge of the upper basin before turning around toward Aasgard Pass. There were no signs of mountain goats, and I only ran into one party the whole time. It was eerily quiet on the way back to the top of the pass.

I got back down to camp and then packed up to head out. The two-mile hike out felt like forever, especially now that the daylight was getting shorter. Later I found out the Green Trails map had misprinted the mileage. It was, in fact, five miles from the Stuart Lake trailhead to Colchuck Lake.

This trip was memorable, including leaving my GPS device by the trailhead accidentally. But until we meet again, Enchantments! 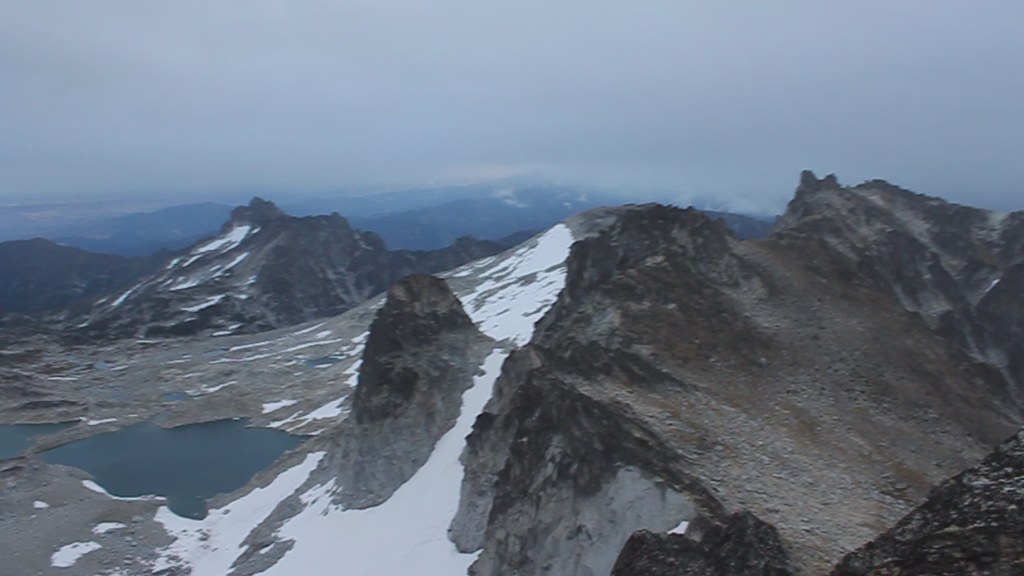