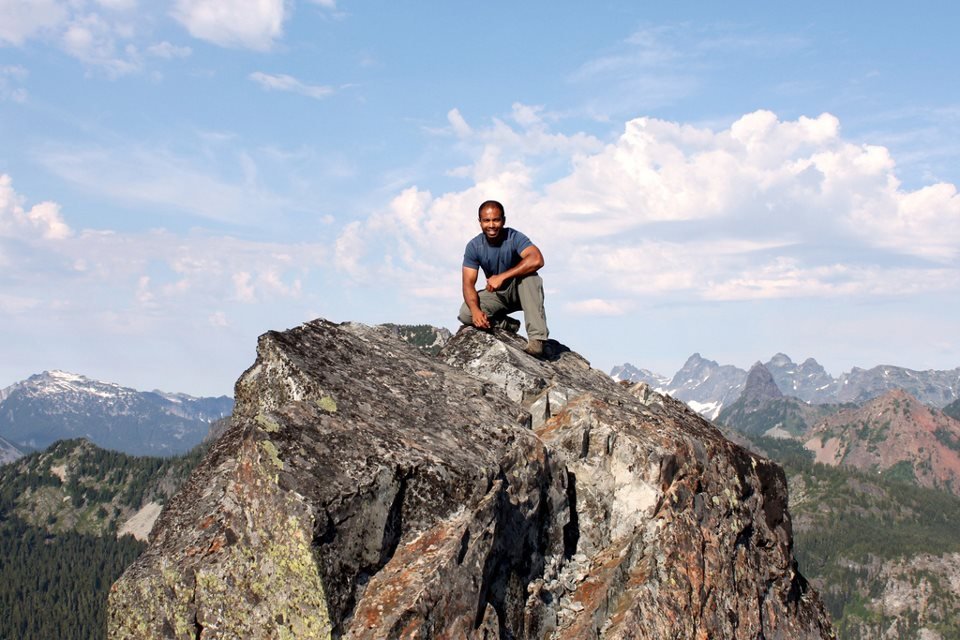 Another one of my spur of the moment hikes on a Sunday. I decided to ditch doing cardio the gym and getting my workout outside on a day like this instead. It needed to be some place close, preferably some place I have not been yet. Denny Mountain stood out as I searched for a hike around Snoqualmie Pass. Since I tend to seek out obscure hikes that don’t get much traffic like Snow Lake trail across the valley, I didn’t expect to find too many trip reports online. Luckily, two of the very few reports I found included a topo map.

Going up the ski slope was interesting. According to one of the two reports, the group followed the Armstrong Express ski lift all the way to Midway. I decided to go the same route because it was a straight shot. But as soon as I heard running water I knew I was in trouble—alder! Needless to say, it took a while getting through the alder and big rocks before getting to a talus field. Walking on talus rocks made the hike go a lot faster, and it wasn’t long before I reached Midway.

The topo map from the report also showed the route going up south face of Denny through the basin; I followed that as well. It was a painless route, just needed to avoid the alder whenever I could. Although the alder in the upper basin was shorter and not nearly as annoying as the one in the lower slope. Some snow left at the head of the basin below the scree, but will probably all be gone in a week or so.

The class 3 climb was pretty short (approx. 15 feet) and it started soon as I reached the ridge. A couple of loose rocks, just needed secure my steps on the solid ones. Once I got to the top of the class 3 climb, it was about a 500-feet walk-up to the summit. Awesome views, the south was somewhat obstructed by trees but I could still get a panoramic view by standing on top of one of the several boulders. Best views were to the north and the east in my opinion.

It didn’t take long to get back down to Midway, but I didn’t want to go through the alder again. When I looked down the slope from Midway I noticed the area west of Armstrong Express didn’t have much overgrown. There appeared to be a trail headed that direction so I followed it pretty much all the way to the bottom. If I had known about that trail, I would have taken it on the way up than putting myself among the alder. Oh well, a lesson learned.

Insect repellent wasn’t needed to my surprise, but I wasn’t complaining. My only complaint about this trip was the amount of trash, mostly from Midway to the head of the basin through Edelweiss. There you have it skiers, pack out!