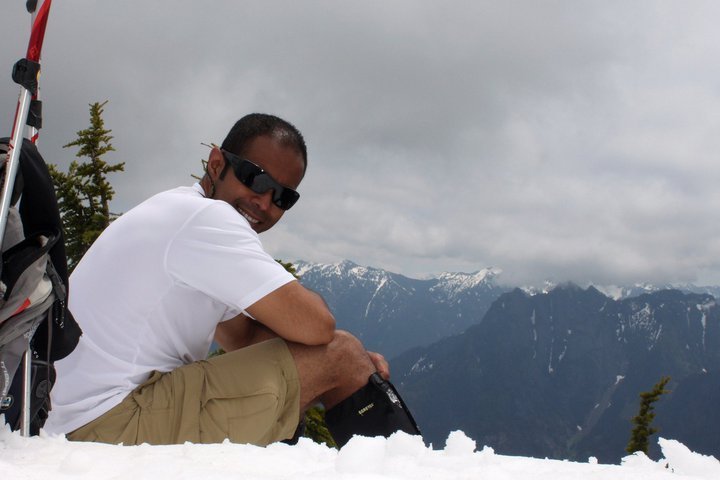 Still bummed about the weather on Park Butte, I decided to get out again today to catch some nice weather. Since I have been wanting to hike Green Mountain and the North Bend area was going to be mostly sunny, this was a perfect choice. The dogs got their weekly hike on Park Butte yesterday, so it would just be me on this hike—a little “me” time.

This time I had no problem locating the Sitka Spruce trail this time. It’s just past Granite Creek on the other side of the concrete bridge. Not too eventful between here and the old CCC road. Once the road started to ascend after passing the CCC road, I was surround by lots of trees and a few long switchbacks without much view. The valley finally came into view once I reached Promontory vistas. Snapped a few photos there and off to the promontory trail I go.

The trail was quite steep and it reminded me of Red Mountain (Painted Mountain) quite a bit. Snow showed up at 3,000’ and continued all the way to the top. The trail followed the ridge line to the summit with flagging throughout, pretty self-explanatory. Go figure. Mostly sunny weather until just below the summit. Somehow the clouds all decided to roll in at the same time. Views to the west were virtually nonexistent, but I managed to get some decent photos of some of the eastern peaks. Mailbox Peak was a hit-or-miss, and no views toward direction of Mount Teneriffe.

On the way down I ran into a few guys just before reaching Promontory Vistas. They turned out to be part of The Seattle Gay Hiking Group and had questions about the trail condition to the summit. I probably would have stayed and visited with them a while longer if I wasn’t trying to make it back to Seattle in time for SIFF.