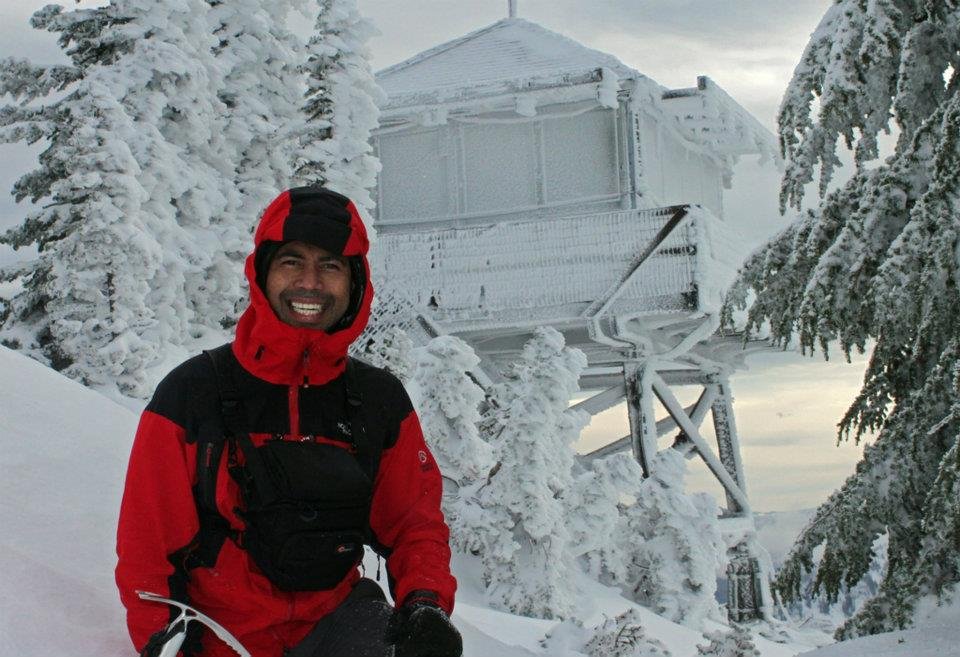 Granite Mountain has been my opening hike for the past two years. I got to the trailhead a little before 9 AM tp three vehicles in the lot. As I walked past the two people in one of the vehicles, the woman asked if I were so and so. It turned out she had contacted me last summer to get info on my hike to Eightmile Mountain. Small world!

Judging from the fresh foot tracks in the snow, there was one other person ahead of me, thought I never caught up. It started to get breezy at the Alpine Lakes Wilderness sign and all the way to the bottom of the winter route snow chute, then it ceased. I was able to follow the snowshoe tracks up the chute without using my snowshoes, just spikes worked fine.

The minute I got out of the tree line that’s when the strong wind hit. It went from bearable to uncomfortable as it got stronger with no signs of easing. As the slope got steeper and icier, I switched to ice ax. Just as I was switching gears, I noticed a man coming around the ridge and was doing the same thing. After a brief exchange I found out he had just come from Granite O’Tusk, a nearby peak northwest of Granite Mountain. Snowshoes would have worked great at this point since I didn’t bring crampons, but I managed to get on the southwest ridge in just spikes. By that point, the slope had eased up a bit and I changed my mind about putting on the snowshoes.

At times I sought refuge behind tree stumps and snow-covered, frozen granite rocks to get out of the wind for a few. By the time the fire lookout was in view, I moved to the west side of the ridge to dodge the wind and headed for the direction of the tower. Thanks to the trees and mounds of snow at the top, I was able to stay out of the wind just long enough to snap some photos. It didn’t look like anyone else had been at the lookout tower today, one lonely summit.

The wind was not going to stop any time soon, so I started making my way down the mountain in snowshoes quickly and carefully. “This is insane!“, I thought to myself over and over. The wind is now blowing stronger than it did on my way up! A few times it nearly blew me over, but I managed to get back down to the snow chute in one piece. I didn’t run into anyone else on the way down, and I’m not sure what happened to the couple I talked to at the trailhead who had planned on going to the tower.

A few more cars at the lot when I got back. I supposed everyone else took the Pratt Lake/Talapus Lake trail instead. It felt awesome to have been the only person on Granite Mountain first day of the year.