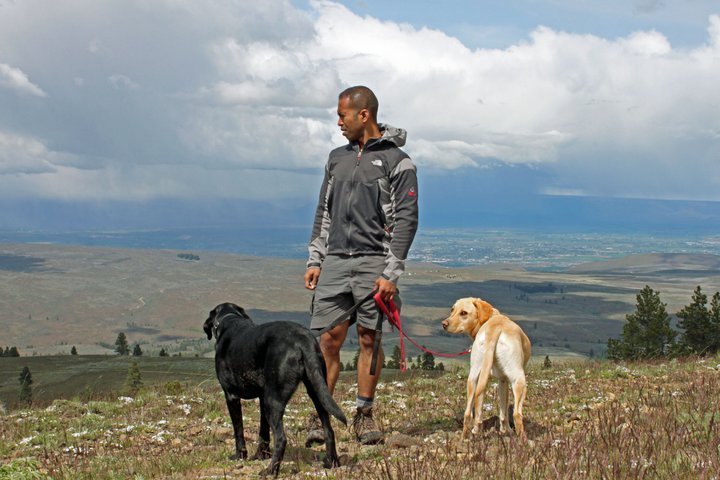 Got up at 5 AM this morning to check the weather report. The NWS site had a 50% and up chance of rain and/or snow in various parts of the Cascades. No rain shadow, no hiking on this side of the mountains for me. So once again we headed for eastern Washington, where east of Cle Elum was supposedly going to be partly cloudy. It looked like there weren’t too many good elevation gain hikes left in and near Ellensburg. Last week we were at Hardy Canyon, so this time we headed for Black Canyon across the river valley.

We got to the trailhead just before noon and there were three cars parked in the lot right off Wenas Road. I wasn’t sure if I could drive my car farther in, so I parked the car by the road as well. Not long after we started, three cars drove past us on the bumpy trail. According to the one hiker we past, there was another lot before the gate and another one half a mile beyond the gate. Oh well, at least we’d get three extra miles of workout for the day.

The first thing I noticed as we started hiking was the number of birds and birdwatchers in the area. I did read in the guide book the night before that this was the best canyon for birdwatchers. So it wasn’t long after we started that we saw birdwatchers with their binoculars in hand enthusiastically studying the various birds. The dogs were on-leash the whole time so they wouldn’t bother other hikers and/or chase the birds away.

The weather was warm in the lower portion of the canyon. I heard birds all-around but it was hard to pinpoint their locations without a pair of binoculars. I read that there would also be elk sightings in the canyon, but with the number of people on the trail today I doubt that they would show up to greet us anytime soon. We hiked past the cabin where there was a group setting up tents next to it. I wanted a picture of the cabin, but the dog belonged to the group was barking even before the dogs and I appeared, so we kept on walking.

Other than hearing birds and seeing wildflowers along the way, there wasn’t much of anything else to see. Once we reached the lower lookout site it was beginning to get a bit windy. From the lower lookout I could see the City of Ellensburg and wind turbines to both east and west, sprawling all across Kittitas Valley. We stayed long enough to scope out the views and then continued on to the benchmark.

It got pretty windy when we got to the upper lookout area and I immediately put on a jacket. The benchmark had an obstructive, impressive view of the valley to the east and mountains to the west. The dogs remained on-leash since there were a few other people there. I quickly took some pictures and ate with the boys while the others lingered for a little while before they started to head back down.

There was another trail leading down west of the benchmark and it would eventually come out of Spud Canyon, the adjacent canyon to the east of Black Canyon. We took that trail back down but scrambled over a couple of ridges until we got back on the Black Canyon Trail. While scrambling down the hill, an elk jumped out of the short bushes and looked to see who had awoken him from his beauty sleep before running off.

The weather was beginning to get cloudy and it was thundering all over. I could see rain coming down in various parts of Kittitas Valley and in the wildlife area. We past two other people on the way back and all the cars parked in front of the gate in the morning had left. As we approached the road I noticed there was hail everywhere, lots of it was left on the car. I couldn’t remember if it had ever hailed the years I lived in Ellensburg. Stopped to get some food on the way out of town, it’s a long drive back to Seattle.