Christmas is an annual festival commemorating the birth of Jesus Christ, observed most commonly on December 25 as a religious and cultural celebration around the world. Wikipedia 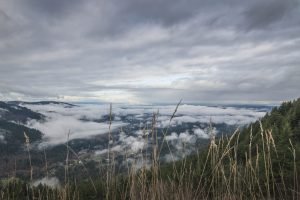 Today I took the pup up to Poo Poo Point where he visited for the first time.

Due to a higher chance of snowfall in the mountains on Christmas Day, we postponed our trip to today.

With more snow in the forecast today, I stayed west of the Cascades and resorted to another one of our Puget Sound area off-season go-to places.

Bacon Creek Road (NF-1060) was clear of obstacles and with a dusting of snow beyond the first mile.

Last Christmas we turned around at mile 2.5 after spending hours swimming in fresh powder while breaking trail.

Judging by other reports, my guess is that no one actually made it to the lake today.

Snowshoes were working in overdrive from the car all the way to the our turnaround point at 2.5 miles.

Road 73 was covered in slush when I made the turnoff from Highway 410, and barely made it  Skookum Flats before parking near other vehicles. Lots of people walking…

Perhaps the best day of the year to visit the lake, as most people were probably just getting up and opening presents.

What I wouldn’t give to be sipping a cup of hot cocoa, snuggling up with the dogs, and opening presents under the Christmas tree…

With a late start, I forewent the original plan of climbing Little Kachess Peak and we scrambled up here instead.

It was rather windy when we got to the trailhead around 10 AM and was not the Christmas weather I had hoped for. Only three cars including mine were when…

Read about Keechelus Ridge somewhere a while ago and decided to tackle it today. There were only a few cars when we arrived at the parking lot, a couple of…

Our first time visiting this lake and we made it despite the amount of snow in the basin!